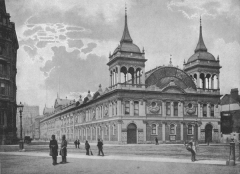 This day in London history: on 14 December 1901 (according to various sources), the first table tennis tournament was held at the The Royal Aquarium and Winter Garden, a place of amusement in Westminster. The Aquarium, which opened in 1876 and was demolished in 1903, was on Tothill Street, near Westminster Abbey. (The term ping-pong was trademarked in 1901 by British manufacturer J Jaques & Son Ltd.)

The street name comes from Tothill Fields, and there are a number of theories as to the origin of the name Tothill. The most likely is that, as the highest point in Westminster, it was a ‘toot’ or beacon hill. Another theory is that it was from the Druid divinity Teut.

Tothill Fields was a once burial ground; following the Battle of Worcester – the final battle of the English Civil War – many of Charles II’s Scottish allies were either buried here or (for those remaining alive), “driven like a herd of swine through Westminster to Tuthill Fields” where they were sold to merchants and sent to the island colony of Barbados.

It later, during the Great Plague of 1665-1666, became a communal burial ground and Samuel Pepys noted in his diary with some dismay that, “I was much troubled this day to hear at Westminster how the officers do bury the dead in the open Tuttle Fields, pretending want of room elsewhere”.

Another ‘fields’ that was supposed to be, but never was, used as a plague burial pit was Bunhill Fields. It was here that, following his death as a pauper, Daniel Defoe was buried without ceremony and with his name spelled wrong.

Also on this day in 1952, John Christie strangled his wife Ethel in their home at 10 Rillington Place. The street, perhaps named after the village in Yorkshire, was renamed after local residents became unhappy with the associations of the name, as well as the number of people visiting the site. The new name, Bartle Road, may have come from a local resident.