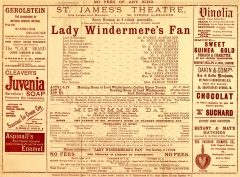 On 22 February 1892 Oscar Wilde’s play Lady Windermere’s Fan was first produced. Irish-born Wilde spent many years in London, living at Tite Street in Chelsea – a fashionable address for artistic and literary folk. The house at 16 (now 34) Tite Street was the Wilde family home from 1884 to his arrest in 1895.

Wilde was arrested for gross indecency, found guilty and sentenced to the maximum punishment possible, two years’ hard labour. After serving some time in London’s Pentonville and Wandsworth prisons, he was transferred to Reading. Wilde, known then as Prisoner C. 3.3 was not, initially, even allowed paper and pen. Upon his eventual release, Wilde left the country for France, where he spent the remainder of his life and wrote The Ballad of Reading Gaol, with its famous line, “Yet each man kills the thing he loves.”

But this blog is not really about Oscar Wilde, or even about Tite Street, but about the nearby Paradise Walk. In London street names ‘paradise’ was often used for an enclosed garden or burial ground and this particular Paradise may have been heavenly by name but it was not always heavenly by nature.

In the latter half of the 19th century, the area was a dismal slum, with more than one family often crammed into small houses. Wilde had a window that overlooked the walk and hid the view with a screen.

Inappropriate street names have generated much debate and comment over the years and in 1856 a gentleman by the name of W Gallaway wrote an illuminating pamphlet entitled ‘Reflections on the defective state of the street nomenclature and numerical irregularities of the metropolis, accompanied with suggestions for their remedy’.

Mr Gallaway, who was particularly irritated by illogical street names, used Paradise as more than one example. For instance, he waxed indignant about the fact that there was an Adam and Eve Court half a mile away from a Paradise Street; one should, he argued, have led into the other.

And, apart from that, he huffed, there was a Paradise Road that was full of “hairdressers, chandlers and brokers shops, and beer-houses (intending no disparagement to any of their callings), dirty kennels, and a police office adjacent”. Did any of that, he demanded to know, “convey any idea of the imaginary residence of our ancestors?”.

A comic 19th-century poem by James Smith  addresses the same issues, with the lament:

I find Broad Street, St Giles’s, a poor narrow nook,
Battle Bridge is unconscious of slaughter,
Duke’s Place cannot muster the ghost of a duke,
And Brook Street is wanting in water.

The conclusion he draws is that, “London’s one mighty misnomer”.

One thought on “Oscar Wilde’s house and London’s misnomers”