Love Lane near London Wall is so called, John Stow wrote candidly in his Survey of London, “of wantons.” There is not much more that can be said, though some people theorize rather wistfully that it could have been a sort of lovers’ lane where courting couples used to stroll. (There is also a Love Lane in Greenwich; that may or may not have been named for the same reason.)

Even more unflinching was the original name of Grape Street, which was once Grope Lane and now, sadly, no longer exists. Early, non-euphemistic, forms of the name appear, as early as 1276, as ‘Gropecontelane’ and ‘Groppecountlane’. In Oxford, lanes of this name appeared as early as 1230. The name, says one source tactfully, is “an indecent one’. When it wasn’t changed completely, the name was altered to less drastic forms such as Grope Lane and Grape Lane.

(There is also a Grape Street, near High Holborn, named from a house that belonged to the leper hospital of St Giles ‘Le Vyne’. It is possible that a vineyard once stood on this spot as the area was particularly fertile and the vines were mentioned in the Domesday Book. The street was once called Vine Street.)

Stew Lane, just north of the Thames is not as appetizing as it may sound: a ‘stew’ or ‘hothouse’ was a brothel and, from the 12th century to the 17th, the banks of the Thames teemed with such houses. They tended to be on the south side but some – like this lane – were on the north bank. (One source says that this lane led down to the waterside embarkation point for women working in the Bankside brothels.)

The stews were licensed and regulated by the government to prevent any debauchery of the respectable wives and daughters of London and, says London historian John Stow, “for the repair of incontinent men to the like women”.

Some of the regulations governing the stews were that they could not be opened on holidays; that women of religion, or married women (presumably even if they were ‘incontinent’), could not work there; that men could not be enticed into them; that no woman could be “kept against her will that would leave her sin”; and that a woman could not “take money to lie with any man, but she lie with him all night till the morrow”. 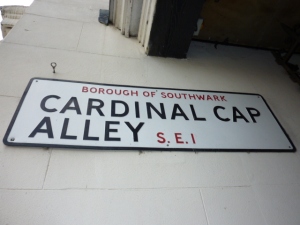 Pretty much directly across the Thames from Stew Lane, Cardinal Cap Alley takes its name from one of the licensed stews of the Bankside area; they often had their names painted on the walls rather than on a hanging sign. These stews, which were licensed under strict regulations, were leased from the Bishops of Winchester, and the working women therein were known as ‘Winchester Geese’. (For more London animal connections in London streets, read our recent post here.) 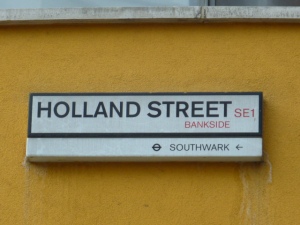 Other streets with particularly bawdy connections include Holland Street, south of the river, which was named for a notorious procuress – the self-proclaimed Donna Britannia Hollandia. She rented the moated manor house of Paris Gardens and ran a ‘stew’ frequented by James I and his court (including George Villiers). Mother Holland was a force to be reckoned with: when during Charles I’s reign, there was an attempt by soldiers to storm the house, she waited until they were on the bridge before drawing it up and depositing the soldiers in the unpleasant waters of the moat.

Although not officially listed in many London street atlases, there is a Cuckold’s Point and the name is what it says. The point, at a sharp bend on the Thames in East London, was once marked by a pole, crowned with a set of horns, which delineated the boundary of land granted to a miller who had been cuckolded by King John.

The story goes that the miller returned home unexpectedly one day to find his beautiful wife disporting herself with the king. Not unnaturally, the fact that it was royalty in his bed did not stop the miller from being somewhat upset about the whole matter. In order to appease him, King John granted the miller as much land as he could see; the furthest spot was the point that bears the name.

There was, however, a catch (there often was with royal generosity back then): the king also granted the new landowner the privilege of an annual fair – but on the condition that, on the day of the fair, he should walk to the point wearing a pair of buck’s horns on his head. The miller’s jealous neighbours had to wrest some satisfaction from this downside to his newfound wealth: they dubbed the fair Horn Fair and gave the name of Cuckolds Point to the termination of the miller’s journey.

4 thoughts on “Telling it like it is: bawdy London streets”