It’s World Animal day today and – no surprise – London streets are full of various animals, as described in our post entitled ‘I’ve never met an animal I didn’t like’, which looks at some of the fauna streets, such as Bear Gardens, Cock Lane, and Houndsditch. Speaking of hounds, here’s another dog street: Dog Lane in Neasden, northwest London. (Entertainingly, there is a Baskerville Gardens in Dog Lane.)

The lane takes its name from the Old Spotted Dog pub that once stood at the end of the lane. Many streets take their name from signs, and those signs were often given nicknames that reflected public opinion on the merits (or representational accuracy) of the painter. In this case, the spotted dog may have been a leopard from from a family coat of arms. 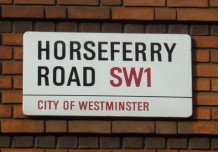 Other amusing examples include one proud shopkeeper who had a sign painted, showing a human leg with a garter and a star (possibly to reflect the fact that he had received the Order of the Garter). To his chagrin it was not long before he discovered that his sign was referred to as the Leg and Star.

A common change in signs was the Swan and Harp, which was generally reduced to the Goose and Gridiron, which then became a sign in its own right. There was once a Goose and Gridiron near St Paul’s, where a feast was held in 1717 to commemorate the first Grand Lodge of Freemasons.

Today is also Cinnamon Roll Day, according to the Party Excuses website, so let’s revisit Cinnamon Street – a photo of which can be found on the excellent food sign website of streatsoflondon.com. The street first appeared at the end of the 17th century and probably takes its name from the fact that the spice was sold there. Our earlier blog post on Cinnamon Street explains its street’s grisly connection to Ratcliff Highway Murders, while our culinary post looks at some of the edible street names of London.

There are many other spice streets in London, including Camomile Street, Garlick Hill, and Saffron Hill.

Incidentally, PD James (the brilliant crime writer and creator of poet-policeman Adam Dalgliesh), co-wrote a book about the murders: The Maul and the Pear Tree: The Ratcliffe Highway Murders, 1811.

3 thoughts on “Dogs, garters, and spices in London street names”