A short blog today, to go with two short passages in the City of London: Prudent Passage and Whalebone Court. 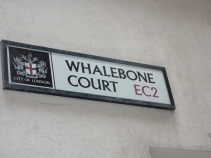 Whalebone Court, according to an 18th-century source, was so called because whalebone was boiled there, presumably in preparation for it being made into corsets.

The name of nearby Prudent Passage is not quite so obvious; one theory is that it may have been something to do with “the foresight displayed in its construction”.

More entertaining is the theory that it once served the same useful function as Passing Alley, and therefore was a prudent route to take on the way home after spending too many hours in the pub.
Another relatively short passage in the same area is Tokenhouse Yard, and more of that in a future blog post.

2 thoughts on “Prudence and whalebones”