Skip to content
I’ve been catching up on my street name signs: many of the streets in the pages of this blog have gone unillustrated because of a lack of my own photos. So, here are two recent additions.

First, Amazon Street, which takes its name from the 18th-century Phoebe Hessel, who was born in the area. She served overseas as a man, having disguised her gender to follow her lover into battle, and was later a local character in Brighton, becoming a favourite of George IV, Price Regent and living to the ripe old age of 108.

The inscription on her gravestone in Brighton reads: 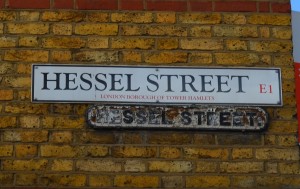 “In Memory of PHOEBE HESSEL who was born at Stepney in the Year 1713. She served for many years as a private soldier in the 5th Regt. of foot in different parts of Europe and in the year 1745 fought under the command of the DUKE of CUMBERLAND at the Battle of Fontenoy where she received a Bayonet wound in her arm. Her long life which commenced in the time of QUEEN ANNE extended to the reign of GEORGE IV by whose munificence she received comfort and support in her latter years. She died at Brighton where she had long resided: December 12th 1821 Aged 108 Years.”

Phoebe also gave her name to nearby Hessel Street.