But first, a random fact for today. (I love learning random snippets of information and in the assumption that my readers are of similar mind, I will start to share some of them, mostly nothing to do with London street names.)

I’ve had occasion to mention Hereford before in this blog, as being one of the cities that lays claim to being the birthplace of Nell Gwynn. Well, I learned recently that Frank Oz was born there. Yes, that Frank Oz: voice of Miss Piggy, Grover, and Yoda, among others; corrections officer in Blues Brothers, and booking cop in Trading Places; and director of a number of movies including Little Shop of Horrors, Dirty Rotten Scoundrels, and In & Out.

Back to London street names, starting with Carting Lane.

This is one of those streets where residents said it like it was and in the mid 19th century the name was changed in deference to the residents’ sensibilities. This lane off the Strand and near to the Savoy Hotel was once Dirty Lane. The new name may reflect the traffic of carts bringing goods to and from the wharfs at the end of the lane.

But of more interest and entertainment than the derivation of the new name is the reason for the lane’s erstwhile nickname.

Towards the end of the 19th century a Mr JE Webb patented an invention that was destined to shake the world. His sewer gas destructor lamp, which was designed both to reduce the hazards (and odour) of explosive methane gas that built up in sewers, and also to cast light on the streets of England’s cities.

With a flame generated by burning the normal gaslight gas, sewer gases were drawn up and burnt off along with the regular gas to produce less unstable (and less smelly) carbon dioxide and water vapour. The invention was hailed as a brilliant innovation, and Webb soon sold thousands of lamps worldwide. One of his masterpieces even stood in Carting Lane, next to the nearby Savoy, and cast its light on the rich and famous guests of the day (whose waste also helped to power it).

The lamp, not unnaturally, also gave rise to the nickname of ‘Farting Lane’. 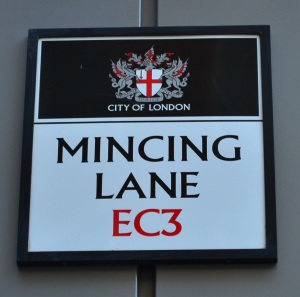 Mincing Lane, whatever pictures the name may conjure up, is nothing to do with an odd way of walking or of meat grinding.

John Stow tells us (and this seems to be generally accepted) that it was once “Mincheon lane, so called of tenements there sometime pertaining to the Minchuns or nuns of St Helens in Bishopsgate.” The word derives from the Old English feminine of ‘monk’, and the name dates back to the 12th century.

The 17th-century speculator Nicholas Barbon, who has connections to Red Lion Square, and was not always known for attention to detail on his building projects, developed some houses in Mincing Lane; with one development “all the vaults fell in and the houses came down most scandalously”.

Somewhat more successful is Minster Court; a complex of three office buildings in Mincing Lane, it made a cameo appearance in Disney’s 101 Dalmations as the exterior of Cruella De Vil’s fashion house.

Staining Lane was called Staningelane in the 12th century; this is from the Old English ‘Staeninga haga’. The ‘Staeninga’ part refers to people of Staines but the ‘haga’ is viewed variously by different people as an enclosure, a town house, or a part of the city under a different jurisdiction.

John Stow’s theory, however, and one which no-one else seems to buy into, is that the lane was named for the ‘painter stainers’ who lived there; a picture on canvas was at one time known as a stained cloth.

A church of St Mary Staining, said to be dedicated to the men of Staines, was lost in the Great Fire of 1666 and never rebuilt, though there is now a park on the site where the church stood.

Incidentally, Staines was once in Middlesex, which no longer exists as a county, and is now in Surrey. In 2012 the town changed its name to Staines-upon-Thames, apparently because of the town’s association with spoof rapper Ali G, created by Sacha Baron Cohen.