Today’s post on culinary streets starts with explicit content, so those of you with delicate sensibilities should look away now and skip to Green Lettuce Lane.

It is likely that that a vineyard once stood on this spot as the area was particularly fertile and the vines were mentioned in the Domesday Book. In fact, there were once many vineyards in London and many Vine Streets in London; there is still a Vine Street near Piccadilly.

There was once also a Grape Street that was a lane, now gone, in the parish of St Pancras. Early, non-euphemistic, forms of the name appear, as early as 1276, as ‘Gropecontelane’ and ‘Groppecountlane’. In Oxford, lanes of this name appeared as early as 1230. The name, says one source tactfully, is “an indecent one”. When it wasn’t changed completely, the name was altered to less drastic forms such as Grape Lane, thus disguising the prostitution activities of the street.

Green Lettuce Lane (in 1556, “the lane called grene lettyce”) is cheating slightly, because it is now called Laurence Pountney Hill. In fact it’s cheating completely because it is nothing to do with the edible lettuce but is, apparently, a corruption of Green Lattice Lane and comes from a lattice gate that opened into what is now Cannon Street.

Another, much jollier, explanation is that, although lattice in its corrupted form does play a part, it was not a gate. In earlier days taverns were designed so that customers could see out without being observed by people going past. This was sometimes achieved with latticework over the window, traditionally painted green or red.

The lane was mentioned in the 18th-century bankruptcy courts with a reference to “Richard Bruce of Green Lettuce Lane, Cannon Street, London, insurance broker and merchant (dealer and chapman), bankrupt.” 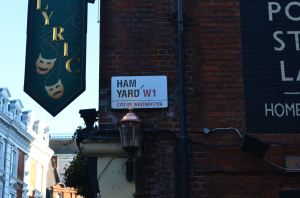 Ham Yard has a culinary connection: food played a large part in the naming of taverns – and hence London streets; often the speciality of the house would be featured in the sign. There was a Ham tavern in this small yard in the heart of the theatre district as early as 1739 and there was also once a Tudor mill in this area (commemorated in Great Windmill Street). The Ham tavern became the Ham and Windmill, was renamed the Lyric in 1890 and still stands there today.

Ham Yard, by happy coincidence, was once the congregation point for London’s ‘sandwich men’. Those sandwiches were nothing to do with food however: these were the walking billboards of the 19th century. These hardy souls, a result of a tax on advertising posters, would “walk the principal thoroughfares from morning to night with their boards high above their heads, secured to their shoulders by iron slips and a strap”. It was not an easy life, especially when high winds would pose a serious threat to their wellbeing. The sandwich men generally worked from 10am to 10pm with one break.

We can’t leave Ham Yard and sandwiches without mentioning the Earl of Sandwich, John Montagu, who is popularly believed to have created the sandwich because he did not want to move from his gaming table and ordered some meat between two slices of bread so that it would be easier to eat. (Another version is that he came up with the concept when he was working at a desk rather than gambling at a a table.)

The Earl was a member of the notorious Knights of St Francis of Wycombe, also known as the Hellfire Club or the Medmenham Monks, a society founded by founded by Sir Francis Dashwood and largely dedicated to drinking, eating, and fornicating. Allegedly.

Another club member was the radical journalist John Wilkes, who had one of the best comeback lines in history. Wilkes, quick-witted and acerbic, is one of the people to whom the following is attributed: when Sandwich said to him, “Sir, I do not know if you will die on the gallows or of the pox,” Wilkes replied, “That, my lord, depends on whether I embrace your lordship’s principles or your mistress.”

Haunch of Venison Yard derives from a tavern that stood at the entrance of the yard from the 1720s to the early part of the 20th century.

The sign was more commonly found near royal hunting forests: though ‘venison’ now means only deer meat, the word derives from the Latin venari, to hunt, and was originally used for the edible flesh of any animal that had been captured and killed in a hunt.

The yard is not far from the Soho area, once grazing farmland and then taken by Henry VIII as a royal park for the Palace of Whitehall, so that may have had some influence in the name.

Another culinary connection is that the sign was also once used by Robert Wills, Confectioner and Pastrycook, whose shop was near St Paul’s cathedral.

Herbal Hill, near Hatton Garden, is also as it sounds. This area of London was an extremely fertile one, abounding with gardens and vineyards (as with Grape Street above) and the hill was once a herb garden attached to the palace of the Bishops of Ely. In the late 1930s the hill, formerly known as Little Saffron Hill was renamed Herbal Hill after the work of John Gerard.

Gerard was a skilled herbalist, and lived in the area. He carefully tended his garden and in 1596 published a list of all the plants that grew in it. His Herball or Generall Historie of Plants was of great interest, being the first catalogue of any one garden, public or private.

(Although some scholars claim that the original book was essentially a translation of a popular earlier Flemish herbal.)The first edition of the Herball was published in duodecimo; only one copy is known to be in existence and it is housed in the British Museum.

In 1597 a folio volume of this Herball, dedicated to Lord Burghley, was published and made Gerard’s name a household word. The book is charmingly written in a chatty tone; for instance, he describes sugar cane, which grows in warm climates: “my selfe did plant some shoots thereof in my garden, and some in Flanders did the like, but the coldness of our clymat made an end of mine, and I think the Flemish will have the like profit of their labour”. 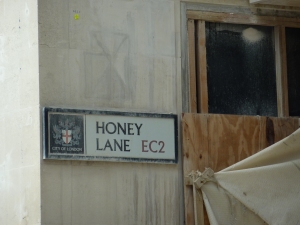 Honey Lane is another Cheapside grocery street: it is where the medieval shopper would go there to buy honey in times when sugar was an expensive luxury that only the rich could afford. Modern researchers believe that the lane was also where the beekeepers lived, and was therefore one of the shopping lanes of Cheapside.

John Strype says of it, “”Adjoining to this street, on the north side, is Honey Lane, being now, as it were, an alley with a Freestone pavement, serving as a passage to Honey Lane Market ; the former Lane, and other buildings, being since the fire of London converted into this market. Among which buildings, was the Parish Church of St Allhallow’s, Honey Lane ; and, because it was thought fit not to rebuild it, the parish is united to St. Mary-le-Bow.”

John Stow’s charming, though somewhat far-fetched, theory for the name is that it was “so called, not of sweetness thereof, being very narrow, and somewhat dark, but rather of often washing and sweeping, to keep it clean”.