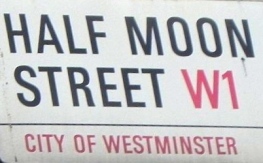 This afternoon I’ll be setting off to take part in the Moonwalk London 2014, a 26.2 mile power walk in aid of Walk the Walk, a breast cancer charity trust. What better time to commemorate Fanny Burney, an 18th-century writer and breast cancer survivor, as well as mention Half Moon Street, where she once lived?

The street, which was built in 1730, takes its name from an old ale house that stood at the corner. Although not quite as common as the sun, the moon is used in many tavern signs. The half moon could be representative of the Virgin Mary: a crescent moon is sometimes shown under her feet in pictures of the Assumption.

There are many fictional residents of Half Moon Street, and other literary figures associated with the street, but for now we will focus on Fanny Burney, also known as Madame D’Arblay, who lived there for a time.

Frances (Fanny) Burney, born in 1752, was a talented and gifted – and largely self-taught – writer, but she should also go down in history as a woman of huge courage, having written the earliest known patient’s perspective of a mastectomy – in her case, performed without anaesthetic.

In this harrowing description, penned several months after the operation and taking her three months to write it as she relived the agony, she wrote:

“Yet — when the dreadful steel was plunged into the breast – cutting through veins – arteries – flesh – nerves – I needed no injunctions not to restrain my cries. I began a scream that lasted unintermittingly during the whole time of the incision – & I almost marvel that it rings not in my Ears still? so excruciating was the agony.”

The pain, she told her sister, continued after the cut had been made, when the delicate area became exposed to air; the ordeal was by no means over at that point as the surgeon needed yet to “separate the bottom, the foundation of this dreadful gland from the parts to which it adhered”, at which point, “I then felt the knife (rack)ling against the breast bone – scraping it!”

This is a small portion of the letter, not for the faint-hearted, in which she also urges Esther and her daughters not to wait as long as she had with any similar health concerns, can be read in its entirety here. Ironically, Fanny outlived most of her family, including her husband, son, sister, and one of her nieces.

Fanny, whose grave demeanour earned her the family nickname of ‘the Old Lady’ when she was about eleven, was small, slender, and short-sighted. She was educated at home, but was teased by her brother because, at the age of eight, she did not know her letters.

A quick learner, Fanny became an avid reader and writer; she wrote a novel (The History of Caroline Evelyn)when she was ten, but possibly burned that and other writings when she was fifteen and trying to “to combat this writing passion”.

The family had moved to London when Fanny was about six, and lived in Poland Street where her father, who was closely acquainted with Samuel Johnson and David Garrick, worked as a music teacher. When Fanny was twelve, her sisters went with their father to France; it was feared that Fanny, who was close to her French, and Catholic grandmother, might succumb to Catholicism. Undeterred, Fanny taught herself French.

She began a diary, the first entry of which is dated 27 March 1768, and experimented with different literary styles. Under a cloak of extreme secrecy she later began writing her first novel, Evelina, apparently composed in part of “disjointed scraps and fragments” she had assembled in 1772, as a sequel to The History of Caroline Evelyn. She wrote the manuscript in a disguised hand, and approached a publisher under the name of Mr King.

Following an unsuccessful first attempt, Fanny, along with her siblings and a cousin who had been taken into her confidence, approached the Fleet Street bookseller Thomas Lowndes, who agreed to publish the book. The book became popular, though it was some time before even her father learned the identity of the author. Samuel Johnson was a great admirer of the book, saying that it was better than the efforts of both Henry Fielding and Samuel Richardson.

In her lifetime Fanny did enjoy commercial success: her book Camilla, or, A Picture of Youth, sold out all 4,000 copies within a few months of publication.

Fanny married Alexandre-Jean-Baptiste Piochard D’Arblay on 28 July 1793, relatively late in life. Her father did not attend the wedding, having expressed disapproval of his daughter marrying a penniless foreigner. The couple remained happily married and had one son.

There is memorial window to her at Poets’ Corner in Westminster Abbey.

If you want to sponsor me on the Moonwalk London 2014, my fundraising page is here.