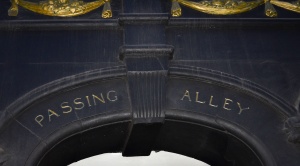 Londoners, like New Yorkers, are not afraid to tell it like it is, and many of the city’s street names reflect (or reflected) that forthright quality. Street hygiene centuries ago was not what it could have been, and residents were by no means shy about calling streets by their most noticeable, however unflattering, attributes – such as Dirty Lane, Filth Alley, Pissing Alley, and Stinking Lane.

Many of these names have been changed to protect the innocent minds; others have been corrupted over the years and are no longer as obvious as they once were.

For instance, Passing Alley near Smithfield Market was changed from Pissing Alley, a name that served to sum up the popular use of the lane. At one end of the the alley was a tavern where prisoners on their way from Clerkenwell to Newgate were allowed to pause for refreshment. Presumably they then also stopped in Pissing Alley for relief.

Maiden Lane in Covent Garden, according to Disraeli (Isaac, not Benjamin), took its name from a statue of the Virgin Mary which once stood on the corner of the lane. However, it is more likely that the name actually derives from the ‘middens’ – dung heaps – that once proliferated in the area. Incidentally, there is a Maiden Lane in Manhattan’s financial district (apparently unrelated to dung heaps) that inspired a 1936 crime film, 15 Maiden Lane.

The most charming theory behind the name of Cloak Lane in the City of London is that it is where Lady Elizabeth Hatton dropped her cloak as she was being carried off by the devil and about to leave her heart in Bleeding Heart Yard. Sadly, the name, which first appears in the late 17th century (thus, alas, predating Lady Elizabeth), is more likely to have derived from the Latin ‘cloaca’, or sewer.

Also in the City of London, Addle Hill has at least two different theories as to the derivation of its name: one is that was once King Adele Street, from the grandson of King Alfred. But, for the purposes of this blog, the other theory is that that the name derives from the Old English word adela (translated variously as stinking urine or liquid manure).

Carting Lane just off the Strand doubly deserves its place in Scatological London. First of all, it was once called Dirty Lane; the name was was changed during the mid 19th century in deference to the residents’ sensibilities.

However, Carting Lane became Farting Lane to many people because of the sewer gas lamp that once stood in the lane – a replica of which is still there.