I was listening to the Stones’ Like a Rainbow the other day and, of course, that made me wonder about colours in London’s street names. And today is National Poetry Day in the UK, which brings two things together nicely: the poet Robert Browning was born in what is now Rainbow Street in Camberwell.

The street retains the name of the earlier Rainbow Lane that led to the manor house of the Dovedales, called Rainbow House. Part of the estate included Rainbow Cottage, which is where the poet Browning was born. 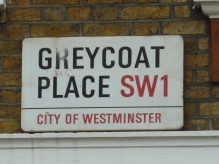 There are not that many colours represented in London streets, however, though the primary colours of light – blue, green, and red – are there. Black, grey and white also feature, along with orange. There are various violet streets and roads, but they perhaps belong more in the flora category.

Black Lion Lane in Hammersmith derives from a pub of that name recorded in the lane in 1668. It is likely to have been a heraldic reference to Philippa of Hainault, queen of Edward III, but black was a relatively common colour for tavern signs. 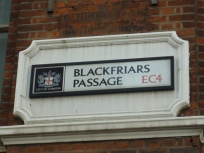 It may have become especially popular after the 18th century Gin Act, which was an effort to clamp down on the problem of drunkenness in London. As early as the 12th century, William Fitzstephen (biographer of Thomas Becket, and witness to his murder), was a fan of all that London had to offer, apart from the “immoderate drinking of foolish persons and the frequent fires”.

The drinking would appear to have become no more moderate six centuries later: by then London had close to 7,000 unlicensed ‘dram houses’ and workmen were often given their wages in cheap gin. An act of 1736 imposed phenomenal fines on licences for drinking houses, and many taverns at the time took to adopting ‘black’ in their signs, as well as using black draperies.

White featured heavily in tavern signs as well, and from west London to east London, there is a White Hart Court off Liverpool Street. The court stands on the site of an old White Hart Inn, built in 1480 and destroyed four centuries later to make room for Liverpool Street train station.

The white hart was the heraldic symbol of Richard II , who insisted that all members of his household wear this emblem. Innkeepers had a long tradition of looking after their own wellbeing by showing allegiance to the crown and that would have helped make the White Hart a popular sign during this particular king’s reign. In fact, the sign was used so much that White Hart became virtually a generic term for a tavern. 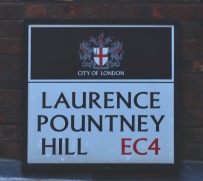 Stories of white harts date back at least to Aristotle, who said that Diomedes consecrated one to Diane, and there are many literary references to white harts. George Fox (1624-1691) died in a friends’s house in this court; there was also a Quaker meeting house, where Fox had preached days before his death. Fox was the founder of Quakerism – the followers of which were first known as ‘Children of the Light’, then ‘Friends of Truth’, or just ‘Friends’. The nickname of the Quakers was first applied to them in 1650 by Justice Gervase Bennet, when Fox faced charges of blasphemy because, Fox said, “I bid them tremble in the presence of the lord”.

Laurence Pountney Hill was once called Green Lettuce Lane but that name was nothing to do with salad leaves. It was, apparently, a corruption of Green Lattice Lane and comes from a lattice gate that opened into what is now Cannon Street.

Towards the end of the 19th century there so many Green Streets in London that one was ingeniously renamed Emerald Street.

Red Anchor Close in Chelsea takes its name comes from the Chelsea Pottery, formed around 1740, which used the mark of a red anchor. (There is also Red Lion Square, with its connections to Joshua Hanway, Nicholas Barbon, and the ghost of Olive Cromwell.)

No relation to Red Anchor Close is Blue Anchor Yard near Tower Hill; blue was common in signs generally, often just to mark the colour of a place of business’s doors or doorpost. The colour was considered to be a symbol of trustworthiness, and the anchor is also representative of hope in Christian symbolism, as in the Hope and Anchor, another common pub sign.

Greycoat Place in Westminster takes its name from the Grey Coat Hospital, a school founded in 1698 for the poor children of the area. The school moved to Greycoat Place in 1701. There is also a Greystoke Place near Holbon; this bears no relation to Tarzan – it was named after a property owner called Greystock.