On Twitter today, I saw a story about what is thought to be what could be the only known portrait of Shakespeare made in his lifetime. The illustration appears in the frontispiece to a biography of pioneering botanist John Gerard, author of The Herball or Generall Historie of Plants, the first catalogue of any one garden, public or private.

There is still a Saffron Hill near Smithfield (it was at one time a slum mentioned by Charles Dickens), but the street once called Little Saffron Hill was renamed Herbal Hill in the 1930s to honour Gerard and his work.

All of which leads us nicely to London’s spicy streets, of which there are many. In fact, according to the excellent website www.streatsoflondon.com, there are 493 roads named after food and drink in Greater London; of these over half consist of either fruits or herbs and spices. Lavender is the second most popular food item and can be found in 29 streets. 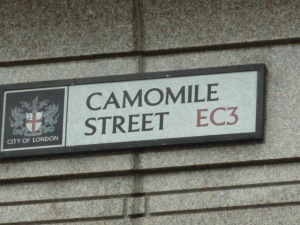 One of these is Lavender Hill, which was so named because of the lavender was grown in the area’s 18th-century market gardens. There are also a Lavender Road and Lavender Terrace nearby.

Similarly, Camomile Street and Wormwood Street are so called because they form part of the route of the original London Wall, where the land was once kept free of houses and allowed to grow wild.

One of the wild flowers that grew here were camomile (from the Greek for ‘earth apple’), used to treat ills such as hay fever, insomnia, and upset stomachs. Wormwood, used to flavour vermouth and absinthe, was said to have gained its name because it grew up in the path followed by the serpent when he was evicted from Paradise.

Mint Street in Southwark is named for mint, but of a different kind: Henry VIII established a royal mint here around 1543 at the home of his brother-in-law Charles Brandon. The mint was used until its demolition in 1557; smaller houses were then built in the area. Until the early 18th century the area was a criminal quarter, a recognized sanctuary for thieves and debtors, and a haunting ground for marriage brokers.

Two of the people who sought refuge in the area were Jonathan Wild and Jack Sheppard, notorious highwaymen. It was Sheppard upon whom John Gay based Macheath, the central character of his 1728 work The Beggar’s Opera. Macheath later became Mack the Knife in The Threepenny Opera by  Bertolt Brecht and Kurt Weill.

Cinnamon Street in London first appeared at the end of the 17th century and probably comes from the fact that the spice was sold there. It has rather gruesome connections: it was in this street that John Williams was staying when a blood-stained knife was discovered among his belongings and suspicion fell upon him in relation to the Ratcliff Highway Murders.

These murders, which pre-dated the activities of Jack the Ripper, caused the Wapping area as much terror and confusion. It cased a public outcry, rewards were offered by the government, and over 40 people were arrested for the crimes before the finger of suspicion pointed at Williams. Whether or not he was actually guilty (and there is a modern theory that he was framed) was never proved: he hanged himself before the hearing. 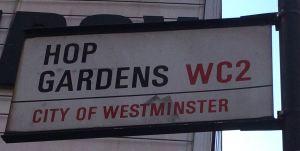