It’s been a shamefully long gap between blog posts, for which I can only apologize whole-heartedly. As ever, my wonderful readers have slapped me into action, and this time it was my Twitter buddy PaxView Jeff (@JR_justJR), whose delightful blog you can read here. He directed me to an article on how London’s food and drink streets got their name; most of the ones listed there have been featured in this blog so it seems a good time to go through the culinary streets of London.

Let’s start with a street that is, surprisingly for many London street names, what it sounds like. Artichoke Hill in East London takes its name from an inn sign. The artichoke was adopted as a sign because of its comparative rarity and unusual shape, which lent itself well to artistic representation; it became a symbol for gardeners and was a common one for inns in garden areas.

Artichokes were introduced to England in the 16th century, during the reign of Henry VIII, and as much as a century later they were still rare enough to command a high price.

There is an Artichoke inn in Devon, dating from the 13th century, which was purportedly used as a headquarters for the Crusaders who were thought to have brought an artichoke back with them.

Bread Street, off Cheapside, also takes its name from bread. Cheapside itself comes from the Anglo-Saxon ‘ceap’: to buy or barter. West Cheap, as it was known (to distinguish it from Eastcheap), was one of the busiest thoroughfares in London and the city’s main food market.

Edward I decreed in 1302 that bakers could sell bread only from what became Bread Street. Before that, the prominent historian and writer Sir Walter Besant tells us, “Of Bread Street there is very early mention. In 1204 the leprous women of St James’s received a charter respecting a certain tenement in Chepe, at the head of Bread Street.”

By the 16th century the street had changed. According to John Stow, “Bread Street is now wholly inhabited by rich merchants, and divers fair inns be there, for good receipt of carriers and other travellers to the City.”

It was also inhabited by the city’s petty criminals: Bread Street became the 16th-century site of a ‘compter’, or small prison used mainly for crimes such as drunkenness, prostitution, and not paying one’s debts. The warden of the Bread Street compter, Richard Husband, was so corrupt and harsh on his prisoners that moves were taken to remove him.

However, it was discovered that Husband owned the lease on the prison so could not be disloged. John Stow was a member of the jury enquiring into the affair, which concluded that among his other transgressions Husband was charging thieves and strumpets four pence a night to lodge in the compter, thus hiding from any official who might be pursuing them.

In order to get around the fact of Husband owning the lease, says Stow, “In 1555 the prisoners were removed from thence to one other new Compter in Wood Street, provided by the City’s purchase, and built for that purpose.”

Bread Street has many famous associations. The poet John Milton was born here, at the sign of the Spread Eagle; his father was a scrivener (public writer, or public notary) in Bread Street, and the Spread Eagle was the Milton’s armorial ensign.

One entrance of the Mermaid Tavern led onto Bread Street while the other was on Friday Street. It was here, tradition holds, that Sir Walter Raleigh instituted the Mermaid Club, or the Fraternity of Sireniacal Gentlemen. Sadly, Raleigh was, at the time of the club’s founding, imprisoned in the Tower of London, but eminent figures such as Ben Jonson and John Donne were among the Sireniacal Gentlemen and there have been many literary references to the Mermaid over the centuries.

Jonson refers to the tavern in a poem, Inviting a Friend to Supper, when he discusses the relative merits of wine over food:

“But that, which most doth take my Muse, and mee,
Is a pure cup of rich Canary-wine,
Which is the Mermaids, now, but shall be mine”

There was also a belief that Shakespeare was a member of the club; grave doubts have been cast on this idea, but it is certain that Jonson was an habitué of the Mermaid, and at least possible that he was joined on occasion by Shakespeare.

Shakespeare also had a connection with the Mermaid’s landlord, William Johnson. In 1613, when Shakespeare bought the Blackfriars gatehouse (later bequeathed to his eldest daughter), Johnson was listed as a trustee for the mortgage. The gatehouse was near the Blackfriars theatre and it is assumed that Shakespeare lodged there, though there is little evidence of that. Neither gatehouse nor theatre still stand.

Admiral Arthur Phillip, founder and governor of a convict colony in Australia that later became New South Wales was born in the Ward of Bread Street. 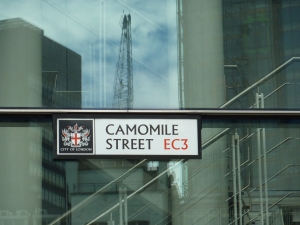 Camomile Street probably takes its name from one of the wild plants that grew abundantly near London Wall. In the 12th and 13th centuries, houses were built no closer than about five metres from the wall to keep the defensive line clear and the land along the line of the wall was allowed to grow wild. Camomile, the name of which comes from the Greek for ‘earth apple’, was used to treat ills such as hay fever, insomnia, and upset stomachs.

Cinnamon Street The name appears at the end of the 17th century and probably comes from the fact that the spice was sold there.

It was in this street, at the Pear Tree Inn, that John Williams was staying when blood-stained knife was discovered among his belongings and suspicion fell upon him in relation to the Ratcliffe Highway Murders. These murders, which pre-dated the activities of Jack the Ripper, caused the Wapping area as much error and confusion. (The eminent crime writer PD James co-wrote a book called The Maul and the Pear Tree: The Ratcliffe Highway Murders, 1811.)

The first incident occurred on 7 December 1811 when a draper, Mr Marr, sent his maid out to buy oysters. She was unable to get back into the shop upon her return and summoned help. The house was finally broken into and revealed the bodies of Mr Marr and the shopboy downstairs, and Mrs Marr and their child upstairs. They had been murdered with a maul and a ripping chisel that were found on the floor of the shop.

Less than a week later the landlord of a nearby pub, his wife, and their maid were all found with fractured skulls and cut throats. There was a public outcry, rewards were offered by the government, and over 40 people were arrested for the crimes before the finger of suspicion pointed at Williams. Whether or not he was actually guilty (and there is a modern theory that he was framed) was never proved: he hanged himself before the hearing.

As well as being a den of 19th-century East End crime, Ratcliffe Highway (later named St George Street and now The Highway), was, according to Walter Thornbury in Old and New London, “The Regent Street of London sailors, who, in many instances, never extend their walks in the metropolis beyond this semi-marine region.”

There were many shops here that sold a remarkable variety of wild animals and, says Thornbury: “The wild-beast shops in this street have often been sketched by modern essayists. The yards in the neighbourhood are crammed with lions, hyenas, pelicans, tigers, and other animals in demand among the proprietors of menageries. As many as ten to fifteen lions are often in stock at one time, and sailors come here to sell their pets and barter curiosities. The ingenious way that animals are stored in these out-of-the-way places is well worth seeing.”

Jamrach’s Animal Emporium was the largest of these; indeed, probably the largest in the world, run by German-born Charles Jamrach who sold animals to circuses, zoos, and private collectors. In 1857 one of his Bengal tigers broke loose, captured a young boy, and ran off with him. Jamrach pursued the tiger and released the boy; a statue at the north end of Tobacco Dock commemorates event.

On the subject of spices beginning with the letter ‘c’, there is also a Clove Street, E13 and a Coriander Avenue, E14, perhaps also because of the spice trade in East London.

With thanks to Mykal Shaw of the wonderful website streatsoflondon.com for many of the photos.