There is nothing quite so charming and alarming as the British eccentric, and London has more than its fair share of these wonderful, colourful characters who, if they don’t provide the names for London’s street names, certainly bring them to life. More characters will make their way across this page, so keep coming back.

This small Whitechapel Street, like Hessel Street off which it leads, is named after a remarkable 18th-century woman, Phoebe Hessel, who was born in the area. The Dictionary of National Biography says of her, somewhat icily, that while some of the stories about her may have an element of truth, they are “utterly inconsistent with each other and with the facts of regimental history”.

So what? They make a good story anyway.

Phoebe Hessel (nee Smith) was born in Stepney in 1713 and enlisted as a man in the 5th Regiment of Foot, supposedly to be with her lover, Samuel Golding. She successfully concealed her gender even from her comrades-in-arms, that is, until Golding was wounded and invalided home. Phoebe then revealed her secret to the wife of the commanding officer; once her secret was out, she was discharged and returned to the UK where she married Golding and bore nine children.

On Golding’s death, Phoebe moved to Brighton where she married William Hessel and became something of a local character. The then Prince Regent, later George IV, who spent much time in Brighton and built the famous Pavilion, granted Phoebe a small pension and invited her to his coronation parade. She died in 1821, at the alleged age of 108 and was buried in the parish churchyard with honours. 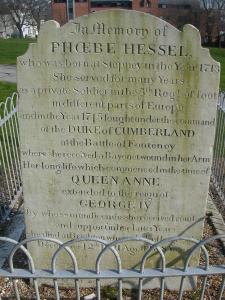 The inscription on her gravestone reads: In Memory of PHOEBE HESSEL who was born at Stepney in the Year 1713. She served for many years as a private soldier in the 5th Regt. of foot in different parts of Europe and in the year 1745 fought under the command of the DUKE of CUMBERLAND at the Battle of Fontenoy where she received a Bayonet wound in her arm. Her long life which commenced in the time of QUEEN ANNE extended to the reign of GEORGE IV by whose munificence she received comfort and support in her latter years. She died at Brighton where she had long resided: December 12th 1821 Aged 108 Years.