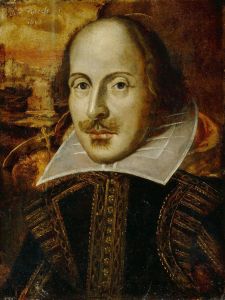 Who am I to buck the trend of the Shakespeare frenzy that is gripping the UK? In the run-up to the various events marking the 400th anniversary of the bard’s death, let’s revisit some of the bard-related London streets – a small fraction of them, I’m sure – that have graced this blog over the years. (And, yes, in keeping with tradition, some of the connections are very tenuous.)

Aldersgate Street was once, in part, called Pickax Street and delineated the northern extremity of the ward; according to English Heritage’s Survey of London the name was perhaps derived from Pickt Hatch, an Elizabethan name for an area of brothels said to be in this part of London”. It is mentioned by William Shakespeare in The Merry Wives of Windsor.

Bell Yard, off Fleet, takes its name from a pub sign; the Bell was once one of the most common pub names in the UK. Another Bell Yard (off Carter Lane) was also named from an inn; William Shakespeare was a frequent patron of the original inn, and the only surviving letter to him was penned here in 1598 by Richard Quyney (who wrote to his ‘loving friend and countryman’. Quyney’s son Thomas married Shakespeare’s younger daughter.

Curtain Road in Shoreditch marks the site of the first London theatre, established by James Burbage and his brother-in-law John Brayne around 1576. Surprisingly, though Curtain is a great name for a lane with a theatre, it was the land, belonging to the priory of Holywell, which was called the ‘Curtayne’. The origin of the name is uncertain.

The theatre was, rather unimaginatively, called the Theatre; a rival one, built nearby, was actually called the Curtain. Both theatres provided entertainment for Londoners for several years, staging plays by Shakespeare and others. 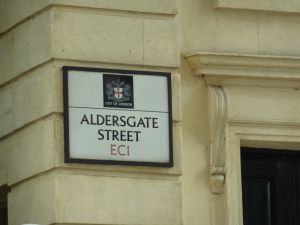 Eastcheap, which had been a market in Roman times and continued as an ,important medieval meat market, looks its name from Old English ‘ceap’, or ‘market’. It was called East Cheap to differentiate it from West Cheap (now Cheapside). It was also a drinking area, with “many hostelries”, the largest and most famous of which was the Boar’s Head Tavern.

Plays were performed in the tavern, which was frequented by Shakespeare who immortalized it as “the very tavern where Falstaff and his joyous companions met”. This gave rise in the 18th century to a Falstaff Club; members would meet at the tavern and assume the names of various Shakespeare characters.

Friday Street, the only day of the week to be represented in London street names, may take its name from Frigdaeges, an Old English name. There is also John Stow’s theory that it was “so called of fishmongers dwelling there and serving Friday’s market”. There was a famous tavern that stood in Bread Street but had a side entrance on Friday Street: the Mermaid tavern.

It was here, tradition holds, that Sir Walter Raleigh instituted the Mermaid Club, which included Ben Jonson and William Shakespeare among its members. Grave doubts have been cast, from many quarters, on the truth of the club’s existence, but it is certain that Jonson was an habitué of the Mermaid, and at least possible that he was joined on occasion by Shakespeare. 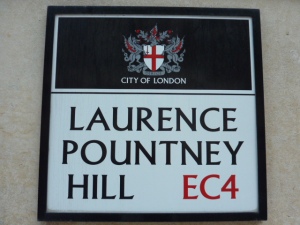 The Laurence part of Laurence Pountney Hill comes from the nearby church of St Laurence, called St Laurence next the Thames in 1275, and which burned down in the Great Fire. (St Lawrence is famous for having been broiled alive upon a gridiron; apparently he said, partway through his torture, “I’m well done. Turn me over!”)

Pountney derived from Sir John de Polteney, a prominent citizen of London and four times Mayor in the 1330s. He owned a mansion near to the church and leased it in 1348 to the Earl of Hereford and Essex for the rent of one rose per annum. The house, known as the ‘Manor of the Rose’ was mentioned in Shakespeare’s Henry VIII.

The name of Old Jewry dates back several hundred years; it was an area occupied by Jewish financiers who had been invited to England by William the Conqueror. In the reign of Richard I, however, the anti-semitism, as portrayed by Shakespeare in The Merchant of Venice, began to take hold. many of the Jews were murdered and their homes destroyed.

Pickle Herring Street, in the Tooley Street area, no longer exists, alas, but it supposedly took its name from the fact that the street was on the site of one of the Thames’ old wharves – where cargoes of pickled herrings were shipped. The name may also have come from the fact that Sir John Falstofe – who gave his name to Shakespeare’s Falstaff – lived on this spot in 1447. Falstofe was once a fish merchant, so it could have been his pickled herrings that gave the street its name.

Playhouse Yard was named for the Blackfriars Theatre (on the site of the ruined Blackfriars monastery), which was opened in 1596 by James Burbage, the father of Richard Burbage, who owned a share in the playhouse. This was to be a backup for the winter months when theatregoers would be reluctant to travel as far as the Globe in Southwark, where Burbage’s company was to be transferred. Shakespeare, who had a share in the theatre, bought a house nearby in 1612 so that he could be on hand for the performance of his plays.

Silver Street (no longer there) was, says Stow, named from the silversmiths who lived there, and earlier forms included ‘Silvernestrate’. Shakespeare took lodgings on the corner of the street and, according to a marvellous website, Shakespearean London Theatres, he spent a number of years living there, from 1604, with a French family called the Mountjoys.

Apparently legal evidence, which survives from May 1612, shows that Shakespeare gave evidence in a lawsuit about a marriage dowry of £60. The evidence confirms his presence as a lodger at a house on Silver Street in the Jacobean period. 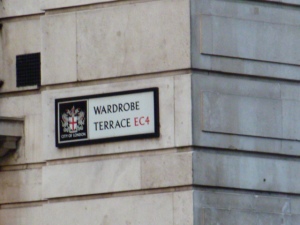 Wardrobe Terrace does take its names from a wardrobe. In 1359 a house belonging to Sir John Beauchamp was purchased by Edward II and became the storeroom for the royal clothing worn on state occasions. The Wardrobe is mentioned in Shakespeare’s will: he bequeathed, to his daughter, land near the Wardrobe.

Worship Street was once known as Hog Lane and may have taken its name from John Worshop, a merchant tailor, who owned over six acres of land in the area. Shakespeare is reputed to have once lived here, possibly when it was still Hog Lane.