Before Boot Street (alphabetically speaking) there are various Ascot Houses, Courts, and Lodges, but they are all buildings rather than streets. So let’s move along alphabetically to Boot Street near Old Street station in Islington.

One thing I have learned about this street is that it was used as a location for the filming of The Crying Game: the exterior of the Metro Pub, where Dil sings the title song, was an empty property behind a pub on the corner with Coronet Street.

Buckle Street, in East London (not far from Amazon Street, Batty Street and Coke Street) may, like Bucklersbury, take its name from the Bukerel (or Buckerell or Bucherel) family who were London property owners in the 12th century. The family had a fortified mansion, or bury, on the banks of the Walbrook – one of London’s now subterranean rivers, which gave its name to a ward and to the street that still bears its name.

(By the 13th century it was less than salubrious as it had to keep being cleared of dung.) Stow refers to “a manor and tenements pertaining to one Buckle, who dwelt there, and kept his courts”.

Speaking of the Walbrook and dung, that takes us to Cloak Lane, which has featured a few times in this blog and is also included in the ‘scatalogical London’ category. Fittingly, it once led over the Walbrook, when it was called Horseshoe Bridge. The current name first appears in the late 17th century and is likely to have derived from the Latin ‘cloaca’, or sewer.

A more glamorous, though unlikely in the extreme, explanation is that it refers to the cloak dropped by Lady Elizabeth Hatton as she was carried away from a party by Old Nick from Bleeding Heart Yard. Similarly, Shoe Lane is supposed to be where she dropped her shoe; again, this is – alas – unlikely. More likely is the theory that an early reference to it as ‘Scholanda’ (Show-land) means that the lane was once a place for the setting out and showing of water-borne merchandise to tax collectors and customers.

Other explanations are that Scholanda could also have meant ‘land shaped like a shoe’ and that the lane led to such a piece of land. Alternatively, it could have taken its name from an ancient well –
Showelle – at the north end of the lane.

Give me Lady Elizabeth any time.

Next, we have Cloth Court, Cloth Fair, and Cloth Street, all of which presumably get their name in the same way. From the 12th century to the 19th century a three-day fair – Bartholomew Fair – was held in the Smithfield area; money charged on tolls for goods was a source of income for the priory of St Bartholomew.

The fair was, early on, essent

ially a trade fair for the woollen and drapery industries, with Italian and Flemish cloth merchants, though it later became a rowdy free-for-all. By the early 19th century, pickpockets and brawlers dominated, and the fair was discontinued in 1855.

Incidentally, 41 Cloth Fair, built between 1597 and 1614, is one of the only houses in the City to have escaped the flames and lays claim to being the oldest London house in existence.

From cloth to clothiers: Clothier Street (also known once as Crab Court and Carter Street), near Houndsditch has a connection to the rag trade that goes back to Elizabethan times when it was famous as a gathering area for “sellers of old apparel”. An official Clothes Exchange was established there in 1875 and the current name was assigned in 1906. 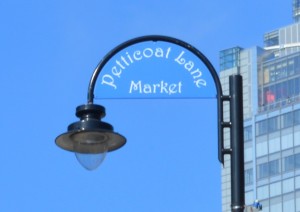 Not far away is Middlesex Street, otherwise known as Petticoat Lane. The earlier, 17th-century, name could be from silk weavers, who would have made petticoats, and who settled in the area; or from the secondhand clothes dealers who had begun to trade in the lane even back then.

Henry Mayhew, a 19th-century social researcher, journalist, and playwright, said of the lane that to look down it was “to look down a vista of many-coloured garments”. Less poetically, FH Habben, a contemporary of Mayhew, and a somewhat curmudgeonly scholar of London’s streets, stated firmly that the name was “The English form, I presume, of petit court, the little short lane.”

Fashion Street is nothing to do with fashion but takes its name from the Fossan brothers, Thomas and Lewis, who owned the land upon which the street was built in the 1650s. On second thought, there is also a clothing connection of sorts: Thomas was a skinner.

Hanger Lane in West London was called Hanger Hill in 1710; it was the site of a wood called ‘le Hangrewood’ in the 14th century. The word comes from the Old English ‘hangra’, meaning a wooded hill with clinging steep slopes.

Hat & Mitre Court, little more than a slight gap between buildings, doubles up on the headgear theme, as ‘mitre’ is an ecclesiastical hat of sorts. The second half of the name comes from an 18th-century tavern called the Mitre, a common tavern name, especially in areas, such as this (the priory of St John was nearby), with a large ecclesiastical population.

Why hat as well is not clear , though it was also common in signs, both for hatters’ shops and for taverns. Possibly a new landlord of the Mitre once had a tavern called the Hat and was reluctant to give up the name and possibly lose customers. Combining the names of two taverns was a ruse often employed for landlords to get the best of both worlds as far as customers went.

From head to foot with Hosier Lane, which is exactly as it sounds. In the 14th century the hosiers lived and worked here, making their age’s equivalent of today’s trousers: fashionable garments that replaced the robes of previous generations. These hose were brightly dyed, often with legs in contrasting colours.

The houses in the lane were, at one time, nearly all built of timber, probably dating back to the 17th century. There was a barber’s shop on the corner, in which was displayed a dagger said to be the one with which Walworth killed Wat Tyler, virtually on that spot.

Keeping up with the clothes theme, in the 18th century, the lane was a resort spot during the time of Bartholomew Fair, when “all the houses were made public for tippling”.

Sadly, Naked Boy Court no longer exists, but takes its name from a sign that was supposed to have been a comment on the rapidly-changing fashions of the time. Apparently the sign painters had so much difficulty keeping up with them that the artist responsible for this one didn’t even try.

Silk Street apparently comes from the silk weaving carried on in 17th-century London largely by French refugees who settled in the Spitalfields area. By the 19th century they had been joined by their English counterparts from the north, who set up silk factories. Many of them lived in this street, which was finally named in recognition of that fact.

Skin Market Place behind the Globe Theatre takes its names from London’s (legal) skin trade: “the skins from nearly all the sleep slaughtered in London” were sold in the market here. Skinners Lane on the other side of the Thames, was known as Maiden Lane and renamed for much the same reason, except that the skins in this case were furs.

There is also a Skinner Street; although one theory is that in the early 19th century an Alderman Skinner was the driving force behind building the street, it is more likely that it is named because in 1630 eight acres of land were bequeathed to the Worshipful Company of Skinners by John Meredith.

Wardrobe Place and Wardrobe Terrace take their name from a house that belonging to Sir John Beauchamp was purchased in 1359 by Edward II for use as the storeroom for the royal clothing worn on state occasions. In Shakespeare’s will he bequeathed, to his daughter, land near the Wardrobe.

Weaver Street, like Silk Street, is named for the weaving industry that became prevalent in this area, especially after the 19th century. There is also a Weavers Lane, on the south bank of the Thames, probably so named for the same reason.

Finally, Whalebone Court, according to an 18th-century source, was so called because whalebone was boiled there, presumably in preparation for it being made into corsets.