Today’s random fact: the Livery Companies of London (which have direct connections with many street names) were also known as ‘mysteries’. From the Latin misterium, which in this instance roughly translates as ‘closed circle’, or ‘professional skill’. I got to that by looking up more about the Fruiterers’ Company, of which Edward Lear’s father was a member.  The Worshipful Company
of Fruiterers, has been in existence since before 1300 AD, and is 45th in order of precedence of the Livery Companies.

Edward Lear died on this day in 1888. He was born in Bowman’s Mews in Islington (off Seven Sisters Road) the mews takes its name from the fact that the area was a popular site for archery in Elizabethan times.

All of which is nothing to do with my intended post for today, but it shows how wondering about street names is a journey with many varied and wonderful destination. A recent post featured verb street names, and Allgood Street was one of yesterday’s offerings. That made me think ‘parts of speech’ and today I give you adjectives.First a disclaimer: I’m not including colours in this, but there are colourful streets here and here, or the old and new type of street names. There are more than enough adjectives, of which I can cover only a few here, starting with Batty Street. 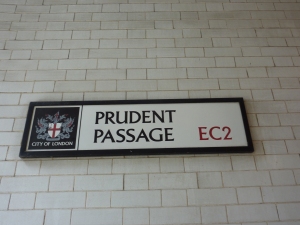 Batty is actually, in this, instance, probably a name: There was a William Batty who developed property in London so it could have been named for him. It has connections with a Victorian locked room murder mystery (not a professional skill type), which occurred around the time of the Jack the Ripper murders.

Crisp Road in Hammersmith is also a name: it honours Sir Nicholas Crisp (or Crispe) who, according to Samuel Johnson was “a man of loyalty that deserves perpetual remembrance”. Crisp was a supporter of King Charles I, and his loyalty was such that his funeral arrangements included provision for his heart to be placed in an urn under the effigy of his king. The heart was to be refreshed annually with a glass of wine.

Crooked Usage in North London has a name that goes back to Anglo-Saxon times when land was divided into strips – usages – which were separated by grass borders. The theory is that, though the usages should have been straight, there was a crooked allotment that, by virtue of being different was worthy of having its name live on.

Early Mews in Camden, alas, has no Late or Tardy street to balance it out. But, of course, this name has nothing to do with time: it comes from the Early family. Joseph and George, plumbers, and John, a builder, built the mews as well as much of the early 19th-century development that was carried on around Camden High Street.

The song ‘Electric Avenue’ by Eddy Grant refers to the Brixton riots of 1981, and the Electric Avenue of the song is a street that was opened as a 19th-century late-night shopping street, complete with electric lighting that was designed to be adequate for evening shoppers: “lined with shops, with a lavish display of electric light everywhere”.

es from the River Fleet, so named not because it was swift, but from an Anglo-Saxon word ‘fleot’ meaning a creek or tidal inlet. Although it still flows, the Fleet is now underground and is used as a sewer – a function that it has performed since 14th-century butchers used it for cleaning out entrails and others took up the habit by dumping refuse into the stream.

Lacy Road in Putney has a lovely, delicate-sounding name that is, however, nothing to do with lace. It takes its name from John Lacy – who was, by happy coincidence, a cloth worker; he had a house by the river, Putney Palace, which was demolished in the early 19th century. Centuries ago the Putney area was a fashionable one; wealthy London citizens liked to have a ‘country’ house in a riverside location, and Lacy was no exception. Elizabeth I and James I were apparently among the guests whom Lacy entertained at his country home.

The derivation of Prudent Passage is uncertain. One theory is that it may have been something to do with “the foresight displayed in its construction”. More entertaining is the theory that it once served the same useful function as Passing Alley, and therefore was a prudent route to take on the way home after spending too many hours in the pub.

Peerless Street is more of a disguise than an indication of any superlative quality. The name comes from a spring that overflowed and formed a pond – Perilous Pond – so-called, says Stow, because “divers youths, by swimming therein, have drowned”. The pond, with its unfortunate propensity for drowning people, was finally closed off. In 1743, William Kemp, a jeweller, converted the pond to a luxury swimming bath with a well-stocked fish pond next to it. The path alongside the bath was called Peerless Row and later became Peerless Street. The pool was closed in 1850 and then built over.

There is a Quick Street in Islington, and also a a Speedy Place near King’s Cross, but neither of these names are anything to do with swiftness. The first was named for John Quick, George III’s favourite comedian, and the second for the Speedy family who held the licence for a tavern there called the Golden Boot.

Savage Gardens, near Tower Hill, takes its name from Sir Thomas Savage, who was created Viscount Savage in 1626. He married Elizabeth Darcy, who deserves admiration above all for having provided her husband with eleven sons and nine daughters.

Sly Street in East London sounds pretty devious, but it has a perfectly innocent name: in 1890 the St Georges in the East member of the London County Council was a Mr RS Sly. 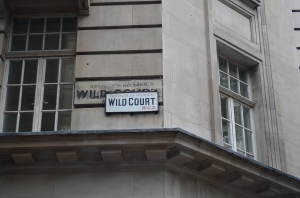 Vigilant Close, though it sounds worthy, comes from one of the locomotives on the Crystal Palace High Level railway, which ran on this site.

Wild Court (and Wild Street) are tamer than they sound. In this case, ‘wild’ is a corruption of Weld, and refers to the wealthy Humphrey Weld who, in the 17th century, had an elaborate mansion in the area. The house had its own chapel and extensive library and, at the time of its construction, enjoyed splendid isolation in what is now the Covent Garden and theatre area. At the time, what later became Wild Street was only a track leading to Weld’s house.