I’m off to the first day of the Hay Festival tonight; it is digital this year, so I am unsure what to expect other than some famous names reading Wordsworth.

(In all the years I’ve lived about an hour from Hay I’ve never been to the festival. One year, as a birthday treat for the husband and myself, I booked (pun unintended) the festival with glamping. However, a newish puppy and being let down by the kennel owner who promised to board him and our older dog meant we had to cancel. It wasn’t to be, I decided, and have never tried to book since. Until now. But I digress.) 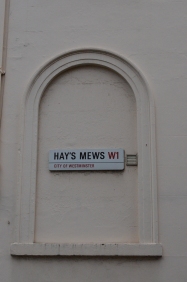 That gave me a number of ideas for the next post theme: the last post was sex-related, so I thought perhaps it would be a nice idea to move from the baser instincts to the intellect and look at book-related streets. After all, books are what Hay is all about.

Which I may do at some point. But, first, hay-related street names.

Farm Street in Mayfair is where building in the area began, around the 1740s, and it takes its name from a nearby farm called Hay Hill Farm. An appropriate name for a farm, you might think, but the name was a corruption of Ayehill, from the nearby Aye brook. The area also boasts a Hay Hill, Hay’s Mews, and Hill Street nearby. Tallulah Bankhead once owned a house in Farm Street.

From farms to wharfs; Hay’s Galleria in Southwark, named after a merchant, Alexander Hay, who bought what was then a brewhouse in 1651. Nearly two centuries later it was converted to a dock and named Hay’s Wharf. (I have yet to discover what it was named before.) The wharf itself was closed in 1970 and was brought back to life as an upmarket mixed use building in the 1980s when the Docklands was the bright star of the London property market. There is a Hay’s Lane, also named for Alexander.

But what about Haymarket? That really is hay-related. And market-related. It was the site of a market for hay and straw that flourished from Elizabethan times until the 18th century. In 1697 the street was paved, each cartload of hay contributing to the expense.

In 1708 Haymarket was described by Edward Hatton, surveyor for a fire insurance company in London, as a “a very spacious and public street, in length 340 yards, where is a great market for hay and straw”.

In 1720 an enterprising carpenter named John Potter built a small playhouse in the Haymarket. The small playhouse was later called the Hay Market and then the Little Theatre in the Hay. According to London historian Edward Walford, “The cost of the building was £1,000, and Potter further expended £500 in decorations, scenery, and dresses. He leased the theatre, immediately after its completion, to a company of French actors, who were at that time much favoured by the English aristocracy.”

In 1729 Henry Fielding started what might today be called a string of hits in the theatre, starting with a burlesque and ending with a political satire that so enraged the prime minister, Robert Walpole, that he introduced what became unprecedented censorship powers that effectively closed the theatre for several years.

In 1807 Haymarket was described by James Peller Malcolm, a topographer and engraver, as “an excellent street, 1,020 feet in length, of considerable breadth, and remarkably dry, occasioned by the descent from Piccadilly”.

However, a few years later, the Prince Regent, later King George IV, thought that London was looking tired and old and he instructed John Nash to enhance the appearance of the city. One enhancement tackled the Little Theatre in the Hay; it became the Theatre Royal Haymarket, which opened in 1821 with a production of Sheridan’s ‘The Rivals’. The theatre is now the UK’s third oldest playhouse still in use.