March 8 is International Women’s Day, so I thought I would lead up to it with an edited rerun of my post from two years ago on that very topic. You can read the post here in full, but I am also providing below synopsis. (Warning: some of the links to London streets are tenuous even by my standards.)

We start with Phillis Wheatley, a former slave who became the first published African-American female poet. The Boston-based US publishers of the 18th century did not want to be associated with a book written by a slave so her work Various Subjects, Religious and Moral was published by a company based in Aldgate.

Aldgate was one of the original gates of London and is the most easterly; it is first recorded in 1052 as Æst geat, or east gate, bu in 1108 is recorded as Alegate by 1108. All of which makes the most sense for the derivation of the name, but some of the other theories are that it is Old Gate (Aeld Gate), Ale Gate, from a tavern, or All Gate, meaning the gate was free to all.

Margaret Cavendish, born in 1623, was a poet, philosopher, essayist, and playwright who had her works published under her own name, unusual for women of the time. One of her brothers was an original member of the Royal Society and, after much argument and dissatisfaction, Margaret was eventually granted permission to attend a session of the Society, and she became the first woman to do. (The Royal Society was founded in 1660, but women were not permitted by statute to become fellows until 1945.) 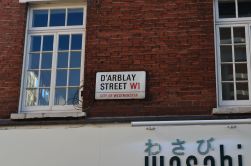 The Society was once based in Crane Court, which takes its name from a 14th-century brewhouse called the Crane and Three Hoops. There is another theory that it was once called Two Crane Yard from a family coat of arms with two cranes.

Frances (Fanny) Burney, later Madame D’Arblay, was a talented and gifted – and largely self-taught – writer and a woman of huge courage. She was a breast cancer survivor and wrote the earliest known patient’s perspective of a mastectomy – in her case, performed without anaesthetic. I recently wrote about her and her connection with Jane Austen, and you can read that post here.

There is a D’Arblay Street, named after her (but no Burney Street) and Fanny lived for a time in Half Moon Street, which was built in 1730 and takes its name from an old ale house that stood at the corner. 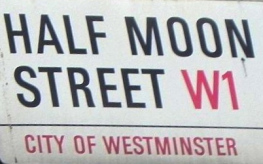 Another famous resident of Half Moon Street was Lola Montez, who was arrested for bigamy in a house in the street. Born Marie Dolores Eliza Rosanna Gilbert in Limerick, Ireland, she later claimed to be Spanish, adopted the name Lola Montez, and became a dancer and adventuress who was as famous for her lovers as for her dancing. She was the inspiration for the song ‘Whatever Lola Wants’.

Mary Frith, otherwise known as Moll Cutpurse, was born around 1584 and lived and died in Fleet Street. She was described by the Newgate Calendar as “A famous Master-Thief and an Ugly, who dressed like a Man, and died in 1663”. She is considered to have been, at least in part, inspiration for Daniel Defoe’s book Moll Flanders. It is believed that John Milton wrote her epitaph, though her headstone was destroyed in the Great Fire of London.

Fleet Street takes its name from the River Fleet, which was not necessarily fast, but took its name from an Anglo-Saxon word meaning a tidal inlet. Although it still flows, the Fleet is now underground and is used as a sewer.

Phoebe Hessel, who gives her name both to Amazon Street and Hessel Street, is another woman who was famous for dressing as a man; in her case she disguised her gender to enlist as a man in the 5th Regiment of Foot, supposedly to be with her lover, Samuel Golding. She eventually moved to Brighton where she died in 1821, at the alleged age of 108 and was buried in the parish churchyard with honours.

Lady Elizabeth Hatton provides one of the many, theories behind the name of Bleeding Heart Yard: she was the basis of the legend about a beautiful gypsy who made a deal with the devil in order to be able to capture the heart of a rich lord. A more recent post on the Ingoldsby Legend of Bleeding Heart Yard story can be found here.

Another real woman to provide a theory behind a London street name (in this case, La Belle Sauvage Yard, which no longer exists) is Pocahontas, a Native American who was captured by the English during Anglo-Indian hostilities in 1613, and held for ransom. During her captivity, she converted to Christianity, took the name Rebecca, and chose to remain with the English. She married tobacco planter John Rolfe with whom she had a son, was feted by London Society, and died at the age of 21 in Gravesend on the family’s way to Virginia.

Tomorrow I hope to publish a post about more women worthy of note, and streets with which they are, however tenuously, associated.