One last post for February (and it may be a few days before I have the chance to write another post). Before we leave the legend of Bleeding Heart Yard, the writer of The Ingoldsby Legends deserves a mention all of his own. The collection was originally printed in 1837 as a regular series for the magazine Bentley’s Miscellany, which was edited by Charles Dickens. The legends were, supposedly, written by Thomas Ingoldsby of Tappington Manor, a haunted stately home in Kent.

In fact, Ingoldsby was the a pen name of an English clergyman named Richard Harris Barham, a cleric of the Church of England, a novelist, comic poet, and friend of Richard Bentley, publisher of Bentley’s Miscellany. Tappington Hall was the small estate bequeathed to Barham by his father. Barham was the rector of St Augustine’s, Watling Street, and of St Mary Magdalen, Knightrider Street (where he is buried). He was also a minor canon and elder cardinal of St Paul’s, and so resided, as did scribes and other minor canons of the cathedral, in Amen Court. 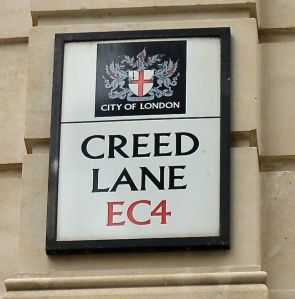 Amen Court takes its name, as do other streets in the St Paul’s area, from the fact that, before the Reformation, there was a regular procession of the clergy around the cathedral; this involved reciting the Lord’s Prayer in Paternoster Row, the Hail Mary in Ave Maria Lane, the Credo in Creed Lane, and the Amen in Amen Corner or Court. (The 60s group called Amen Corner took its name from The Amen Corner, a weekly disc spin at the Victoria Ballroom in Cardiff.) 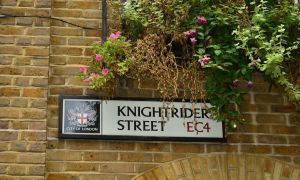 Knightrider Street was part of the route for knights riding from the Tower Royal to jousting tournaments at Smithfield. Simple, eh? However, some wet-blanket scholars dispute the theory on the grounds that there is no recorded instance of the word ‘knightrider’. It could be, the argument goes, that the street was really called ‘Riderstrete’ – rider being a Middle English synonym for knight, and that ‘knight’ was added to the street name in general use.

Watling Street was once the most important street in Roman London, running from Richborough on the coast of Kent, through Canterbury and London, and on to Chester. It’s best if I leave the explanation to our friend Habben: “It pleased the Saxons to connect this with one of their own mythic personages, Waetla, an aptheosised Atheling, or noble and to name it Waetlinga Street, or the road of the Waetlings.” Or Atheling could have meant ‘noble’ and so it was the street of the nobles.