I was driving in the lovely Forest of Dean area today, and I saw signs for a Sparrow Dive and Lark Rise (to Cinderford, maybe?), which seemed rather fitting, given yesterday’s Wren-related post. Guess what? That made me think of bird-themed London streets and, oh, yes, there are many.

(Incidentally, the name Wren does come from the bird: according to the surname database, many early English surnames derived from nicknames bestowed because of a perceived resemblance to various creatures. “The nickname ‘Wren’, derived from the Olde English pre 7th Century word ‘wrenna’ or ‘wraenna’, in Middle English ‘wrenne’, was probably used of a small, busy and quick-moving person.” )

Birdcage Walk near Buckingham Palace is the site of an aviary started by James I and enlarged by Charles II (though some sources give Charles the credit for establishing it). It was also the site of a royal cockpit used for the grisly purposes of cock fighting.

This deplorable ‘sport’ also gave us Cock Lane and Cockspur Street. Cock Lane probably took its name from the fact that it was the site of a breeding ground for fighting cocks. Far more interesting, however, are the facts that it also housed a famous (but fraudulent) ghost, it was where the Great Fire of London halted, and it was, in the Middle Ages, the only place where the City’s prostitutes could live.

Cockspur Street is so named because the spurs with which the birds were equipped to ensure even greater flow of blood were made and sold there. Cock Hill may have taken tis name from some connection with cock fighting, but it has a big state of a ram, so who knows? It is, however, part of the Middlesex Street Conservation Area. Middlesex Street being, of course, Petticoat Lane.

From cocks to hens and chickens, which takes us to Hen and Chicken Court off Fleet Street, named after a tavern called the Hen and Chicken. Hen and chicken were terms for pewter pots used to hold alcohol; they were also symbolic in Christian art of God’s providence, and therefore made a useful image for signs.

A particularly delightful bird street name is Wild Goose Drive (connected to Swallow Close). Although the term ‘wild goose chase’ now means a fruitless or absurd mission, it originally implied an erratic course. The drive is indeed, not straight, which may have suggested the name. 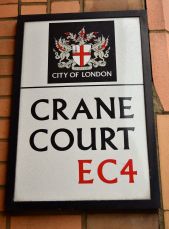 (I could squeeze Chicksand Street and Heneage into this category, which is cheating even by my standards but there is a bird connection and we’ll look at that another time.)